The Chillking Ultra Low Temp Chiller is a very heavy-duty piece of equipment. It has a cascade cooling system. This chiller has a primary compressor that is very large; it is rated at 5 tons (60,000 BTU) although the amount of heat removed steadily declines as the temperature drops. The 2 ton compressor removes heat from the primary 5 ton compressor’s condenser. The heat is then discharged out the side of the chiller.

The 5 ton compressor will remove heat from ambient temperature and downward to well below 0F. Both compressors will continue to cycle until the desired below 0F temperature is reached.

Performance decrease isn’t meant to imply the compressor is doing less. The compressor actually works harder as the temperature drops. The decrease in performance results from the law of thermal dynamics. It takes 1 BTU to change 1 pound of water 1F in 1 hour. The process of the compressor and its refrigeration circuit is the heat removal device. If there is 50% less heat in the liquid it will take twice as long to remove the same amount of heat. One hour becomes two. It will take more time to achieve ultra low temperatures. Plan accordingly. 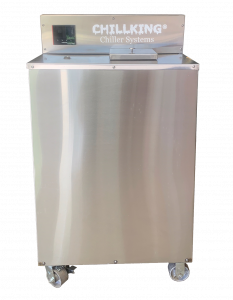